Our Shop Has a New Look!

Check us out by clicking the link at the top of the page or in the sidebar!
Posted by Mary No comments:

He is STILL a wonderful husband and very devoted father, as you can see - 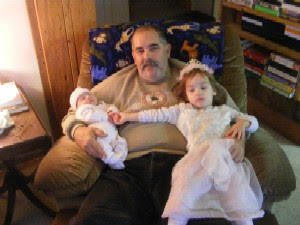 Keith is not going to be too happy about this, but I wanted to do it anyway.  I wanted to show the difference in his face just a few months after getting his PD diagnosis, and now, three years into it.
Today we were discussing what happened at his doctor's appointment, and he told be that he and Dr. Wooten had talked about depression.  I have often asked Keith over the years if he felt depressed, mainly because he looks depressed.  Dr. Wooten believes, and rightly so, that I worry about Keith being depressed because of facial masking.  Facial masking - one of those wonderful PD symptoms.  His face basically freezes, or in unable to register much emotion.  It is so difficult to read Keith emotions and expressions anymore.  I sometimes cannot tell if he is happy, sad, depressed, or angry.  They all look pretty much the same to me now.
I told Keith today that when I look at picrtues of him with Rielly-Anne three years ago, I can see the happiness in his eyes.  Now, looking at him with Cecilia, though I know he is happy, it is as if someone has turned out the light, so to speak.  If you can imagine there was once a light behind his eyes, and now it is gone. 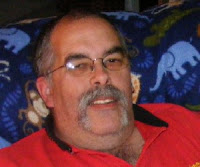 The first picture was taken while Keith was holding Rielly-Anne.  She was about five months old at the time.  He was so happy with her, and you can see it in his eyes.  The bottom picture was taken about a month ago, while Keith was holding Cecilia.  I know he was just as happy holding her as he was holding Rielly-Anne, but you really can't see it.  The smile is the same, but the eyes are very different.  His expression, to me, anyway, looks more like a dead stare with a fake smile.  I just don't see the emotion here that I can clearly see in the top picture.
I hope that by seeing these pictures next to each other, Keith will understand why I always ask him if he's happy.  Things are so different now than what I am used to, and not being able to read my husband's  face is just one of many adjustments I need to keep making.
Posted by Mary 1 comment:

Keith had his bi-annual appointment with Dr. Wooten today. I wasn’t able to go this time because it was so early in the morning, and getting two babies ready that early is not my idea of a good time! Still, I hate to miss appointments with Dr. Wooten.


This appointment was important. Keith has gone off Mirapex and re-adjusted his other medications. Lately he has been having a very difficult time sleeping, and we’ve noticed a few other physical and cognitive changes as well. There was a lot to discuss, and Doc particularly likes to hear the spouses/caregivers point of view. Sometimes we are able to see things the PWP is unable to see, or give a point of view to yet told. All in all, it turned out well – Dr. Wooten adjusted the medication Keith is on, and put him on Neurontin, a drug approved for nerve pain, and commonly used as an anti-seizure medication. I am a little nervous about the side effects (suicidal thoughts!), but I promised months ago to back off a little, so I will. Well, I’ll try to, anyway.

Dr. Wooten also told Keith that he is a good candidate for DBS, deep brain stimulation. I had always thought it was most helpful to those that have severe tremors, which is mild in Keith, but Wooten said that it works wonders on the symptoms Keith does have, namely rigidity and stiffness, and muscle cramps. Keith has never been a fan of DBS, but after talking to Dr. Wooten about it today, he seems pretty eager to learn more. He is open to the idea, which is taking a big step in the right direction. I have to admit; I am a little excited about the thought of Keith not having all those horrible physical symptoms. Imagine Keith not being in pain, or struggling to put his shoes on, or not having a stooped posture at all times! Even if Keith decides against the surgery, it really is nice to know that we have another option. If things get unbearable for him, he can always play that card.  I know, of course, that it is not a cure, but it will help, and when it comes to PD, any and all help is beneficial.

So once again, we have found hope in what seems to be a hopeless disease.  Thank you, God!
Posted by Mary 2 comments: 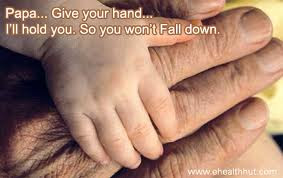